Just in time for holiday shopping for those kids in your life (or in you) that love horror stories, the California Dreadfuls are here!

California Dreadfuls: The Ghosts of San Francisco Bay is the place to start. In this first book, worlds and cultures collide. Two cousins from San Francisco investigate a forest north of the bay that seems out of place. They find it inhabited by not one, but two explorers who visited California hundreds of years before the westward movement and died there. Both spirits are after the same artifact, but which one can the cousins trust? Click to buy in Paperback or on Kindle! 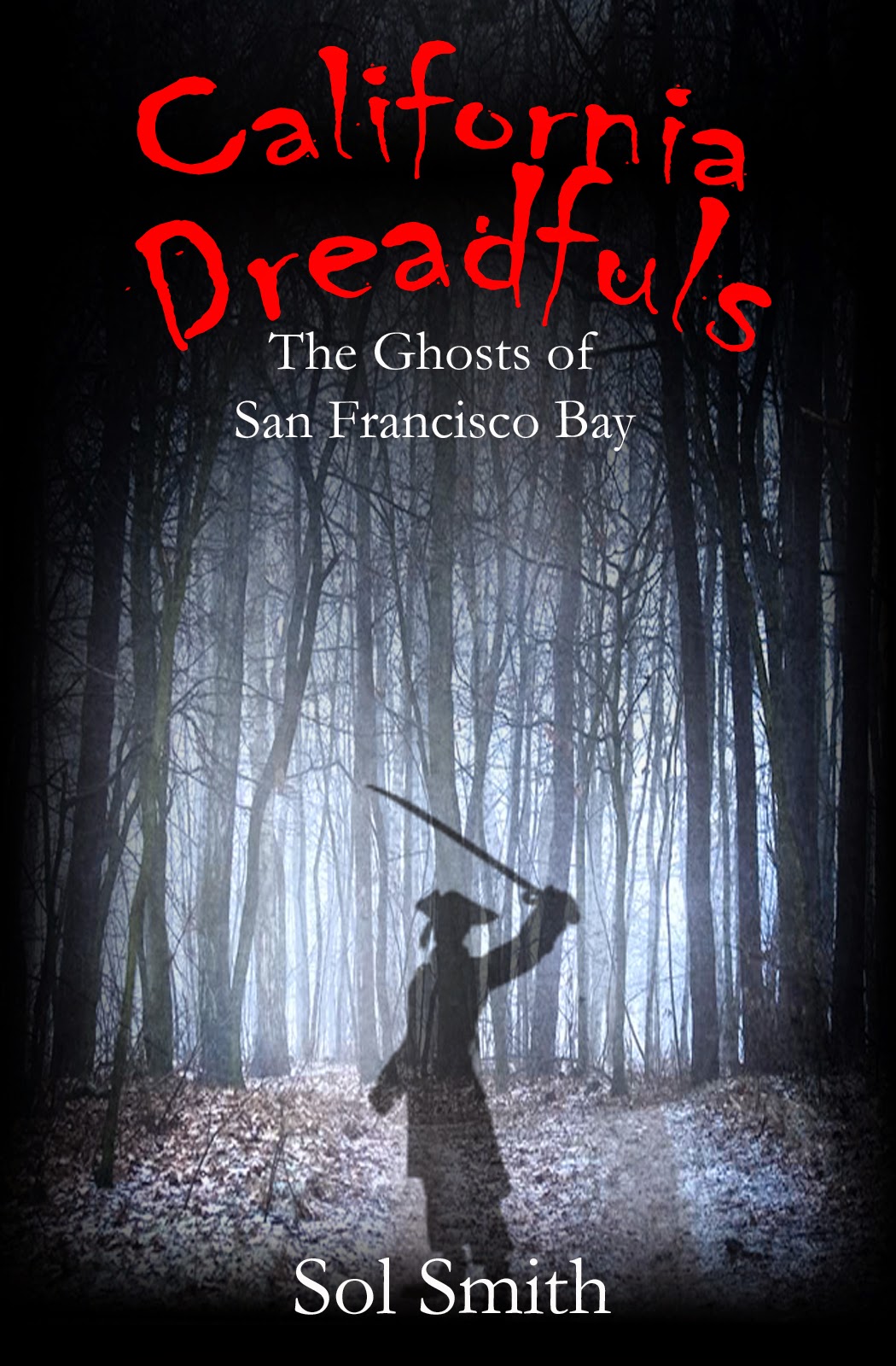 In California Dreadfuls: Danger at Donner Pass, a brother and sister are stranded in the same wilderness that trapped the Donner Party during the gold rush. They learn that there is more to fear in these woods than a shortage of food or a pack of wild animals--a fear that is too terrifying to be faced! Click here to buy in Paperback or Kindle! 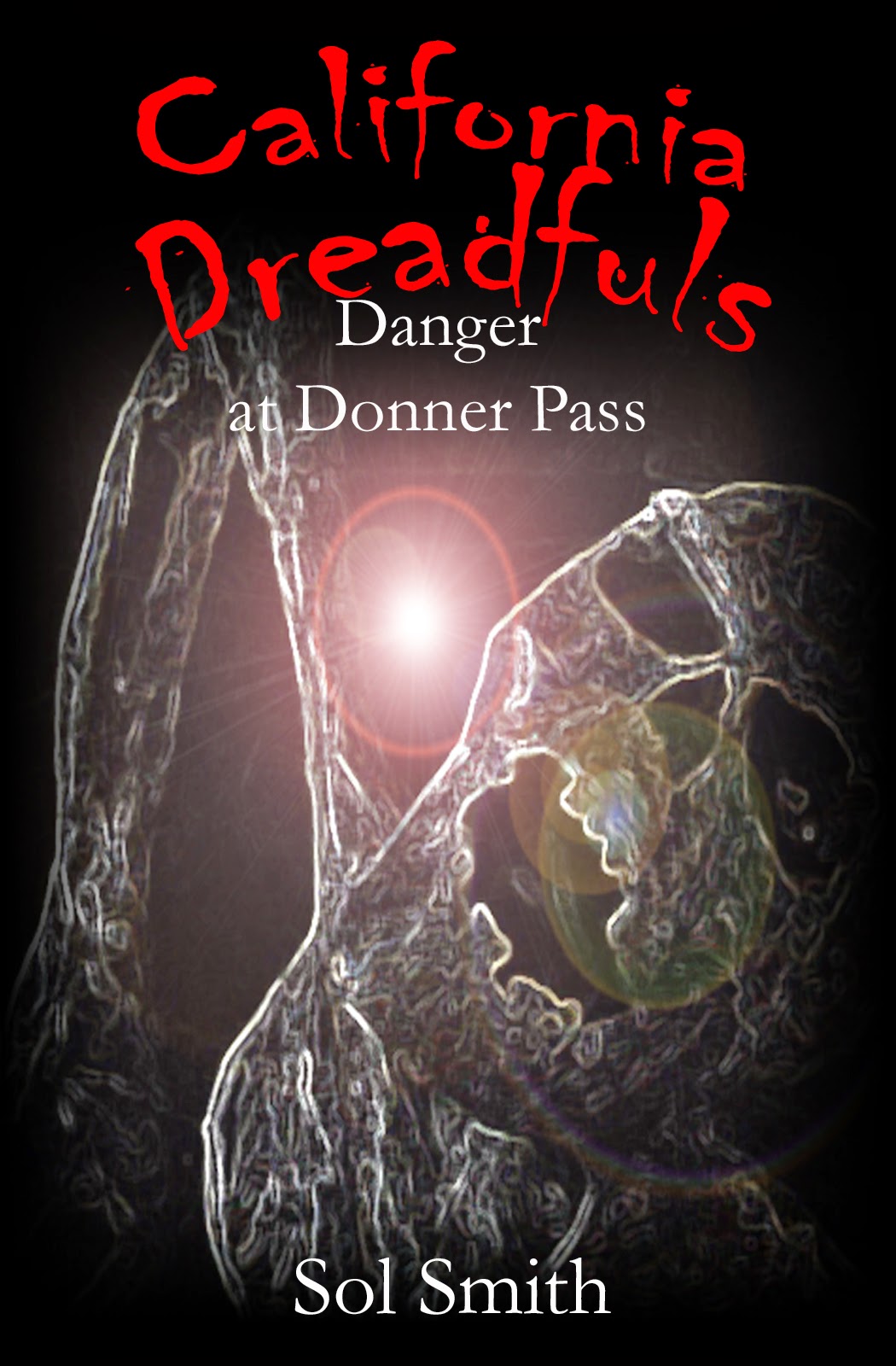 Remember: These are just the first two of the chilling series! Check back often for more!

California Dreadfuls #2: Danger at Donner Pass, is a survival-horror story of a brother and sister stranded in the woods near Donner Lake. This chapter takes place the morning after the two kids found themselves lost in the wilderness. In a dramatic car accident, the Martin, Carrie, and their dad fell down a hillside deep in the Sierras. Their Dad was pinned under the dashboard, but Martin saw that there was another car nearby with a driver still inside. They hoped to find help there...

Carrie and I crawled out of the broken back window of the minivan. Carrie looked up, for the first time, at the hill that the car fell down the night before. She stared for a while, examining the muddy path that our car slid down. She took off her glasses, cleaned them on her shirt, and looked back up before saying, “Whoa. How did we live?”

“Look at the car,” I said. We both looked at the minivan. It was dented and scraped and broken all over. It looked nothing like the car that we left Lake Tahoe in the night before.

“Go on, guys,” Dad said from inside the car. “I’m going to try and see if I can’t get my legs out. And see if the phone is working. Don’t forget a water bottle, in case the driver of the other car needs it.”

I led Carrie around the hill to see the little red Bug at the bottom of the hill. “I think you’re right,” she said.

We walked over to the car, slowly. Water was still dripping in huge drops from the pine trees around us. The only sound was the birds and the dripping water. The driver of the other car was absolutely still, probably still sleeping. I had no idea what time it was.

We got closer and looked up the hill. There was no muddy path that it slid down, like on the hill above our car. “How did it get here?” Carrie said. “If it didn’t fall down the hill? Wouldn’t it be great if there is another road nearby?”

“Maybe it’s a camper!” I said. “He could have spent the night in his car when the rain started coming down so hard last night!”

We were getting excited and we were running faster over the rocks and branches toward the car. As we got closer, I saw that the little car was filled with flowers. Big, tall, yellow flowers like little sunflowers.

“Why do you think he has the car filled with flowers?” I said to Carrie.

We got to the car and stopped just a few feet away. “Hey,” Carrie yelled. “Hey in there, are you okay?”

We waited a second, but the man or woman or whoever that was in the car just sat there, not moving, leaning against the car door, his red hair pressed against the window. Carrie finally walked up and grabbed the door handle and pulled the door open.

The man fell out of the car and onto the ground right in front of us. We looked down and saw that he was dead and had been dead for years. His face was a skeleton face—just deep, dark circles where his eyes used to be; two narrow holes where he should have a nose; a grizzled red beard circled his teeth, and another patch of hair fell off of his skull when he rested fully on the ground. His clothes were rags and we could see bones and dried, dark skin in the holes of his shirt.

The flowers in the car were weeds that had grown up through the floor of the car over the years.

I never thought that I would hear screams as loud as the ones we had made the night before as the car fell down the hill into the forest. But Carrie and I screamed and screamed, falling down backwards at the sight of the dead man on the ground. We scrambled backwards, our legs pushing us back as fast as we could go until our backs were resting against a tree trunk.

“How long has he been here?”

“Carrie,” I said. “He’s been here forever, and he’s never been found! No one is going to find us! No one knows where we are!”
Posted by Sol Smith at 9:06 PM No comments:

Our kickstarter project is now a Staff Pick! This greatly increases the chances of success! We are just $800 away from launching this project. Go ahead and throw a dollar or two our way--I will greatly appreciate it! 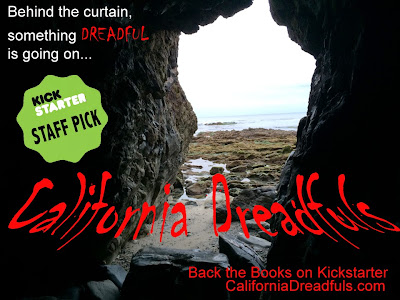 Click and donate!
Posted by Sol Smith at 9:38 PM No comments:

Back the First Four Books!
Posted by Sol Smith at 7:46 PM No comments:

California Dreadfuls #1-#4 needs your help! Back the projects on Kickstarter today, and you can receive the first four books delivered to your home signed and awesome! 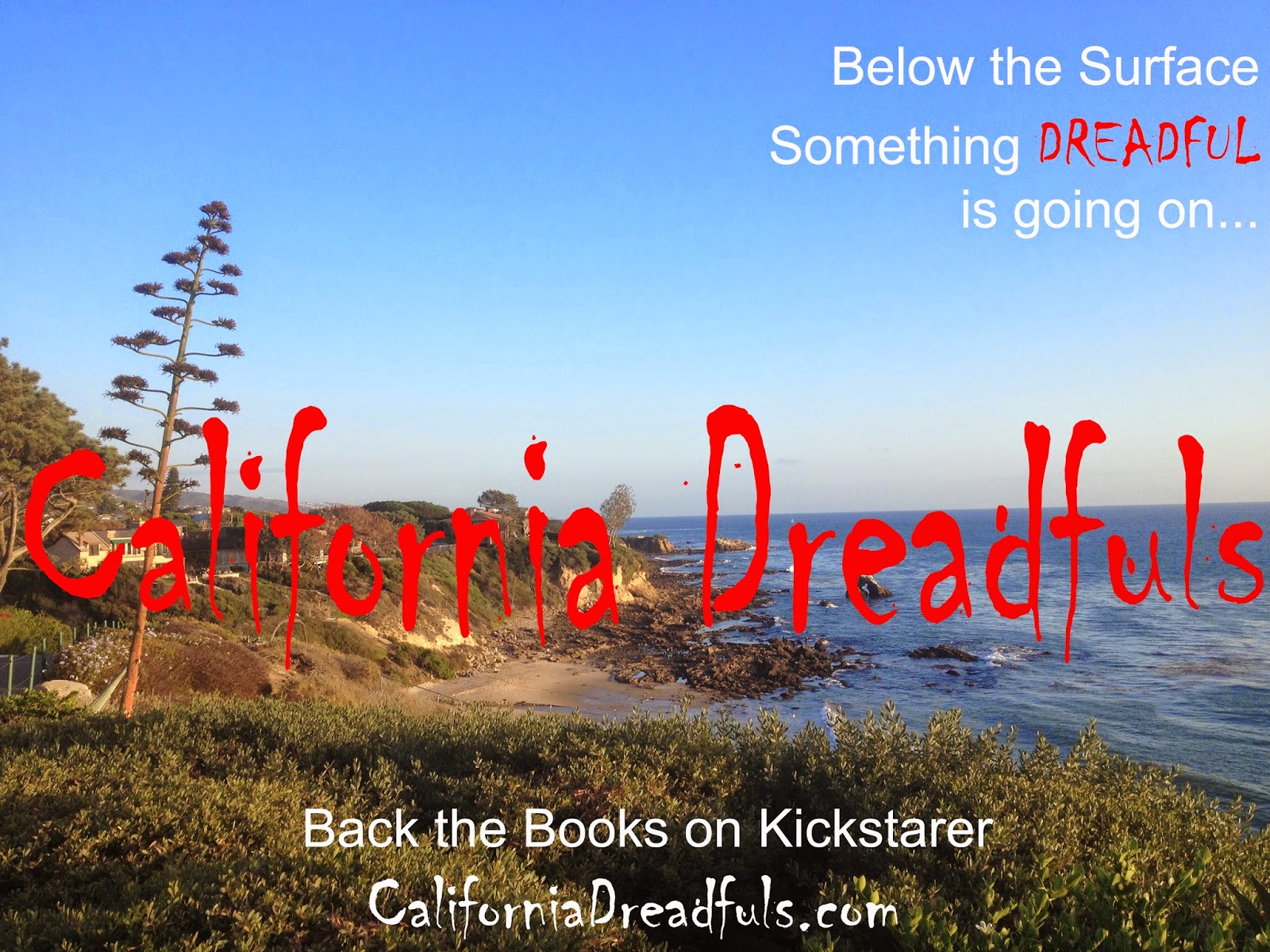 Huntington Beach, CA, July 27, 2014:  It may not be potato salad, but one writer is hoping that Kickstarter will help him realize his dreams. Former English professor and father of four daughters, Sol Smith, has stopped teaching in hopes of promoting literacy and historical understanding through his books. The CALIFORNIA DREADFULS book series will bring California’s rich history, mythology, and cultures to life while mingling it with engaging horror that middle-grade readers will love.

“The idea came to me when I saw how many Goosebumps books my daughters were burning through at the Huntington Beach Library,” says Smith. “They love reading all kinds of genres and they have tackled many more avenues of literature than I had at their age, but the way they devoured the horror stories was amazing to me. As a professor, I know that all reading is good for cognitive skills, but what if reading books like those could also give them interesting historical or cultural perspectives?” Smith consulted his daughters on the form and structure of children’s horror stories before checking out dozens from his local library.

The first book is already completed, California Dreadfuls #1: The Ghosts of San Francisco Bay, tells the tale of two cousin’s from San Francisco’s Chinatown who get wrapped up with a ghost from Sir Francis Drakes ship and a rival ghost from a Chinese expedition that is said to predate Drake’s landing by over a hundred years. “There’s mounting evidence that Admiral Zheng He was the first foreign explorer in the California region,” Smith says. “The early explorers of California seemed like a logical place for the Dreadfuls to start.”

Taking a leap of faith, Smith started a Kickstarter campaign to raise money for the project and a website, www.californiadreadfuls.com. Without even finding a publisher, Smith decided that it was time for a career change. “In the 12 years I’ve been teaching, I’ve seen a decline in student reading skills. Perfectly intelligent students start out as readers and somewhere, school loses them. Most people will never read another book after high school. I did my best with my job, but I think that the important thing is to reach students earlier than college to get them to love reading! The California Dreadfuls will promote reading and education in a way I never could as a professor!”
Posted by Sol Smith at 3:40 PM No comments: